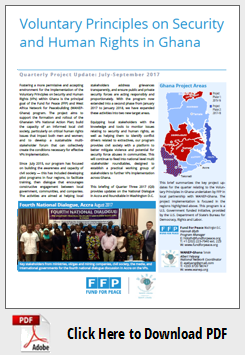 Fostering a more permissive and accepting environment for the implementation of the Voluntary Principles on Security and Human Rights (VPs) within Ghana is the principal goal of the Fund for Peace (FFP) and West Africa Network for Peacebuilding (WANEP-Ghana) program. The project aims to support the formation and rollout of the Ghanaian VPs National Action Plan; build the capacity of an informed local civil society, particularly on critical human rights issues that impact both men and women; and to develop a sustainable multi-stakeholder forum that can collectively create the conditions necessary for effective VPs implementation. A full program scope of work and current activity timeline is attached (Attachment A).

This briefing of Quarter Three 2017 (Q3) provides updates on the National Dialogue in Accra and Roundtable in Washington D.C.

Staging Our Fourth National Dialogue on the VPs

On August 1, 2017 FFP and WANEP-Ghana held the fourth National Dialogue on the VPs in Accra. Bringing together a core group of stakeholders that have become an integral part of the VPs process in Ghana, we built upon previous discussions to follow up on key problem sets and priorities. These included risks associated with increased activities in the oil/gas sector, the current status of the Ghana government’s anti-small scale illegal mining push, and goals related to public security training and private security licensing reform.

Representatives in attendance from the company side included AngloGold Ashanti, Golden Star Resources, Kosmos Energy, Tullow, as well as the Ghana Chamber of Mines and the Ghana Association of Small Scale Mining. From the Ghana Government, representatives included the Ghana Armed Forces, Minerals Commission, Petroleum Commission, Environmental Protection Agency, Ministry of Lands and Natural Resources, Ministry of the Interior, and Ministry of Justice and Attorney General. Civil society was represented by WANEP-Ghana, FFP, WANEP-regional secretariat and GNA; while international government representatives included the U.S., Canadian, and Swiss Embassies. Of the 30 total stakeholders that participated, 37 percent were female; which is the highest ratio of female participants in a national dialogue to date.

Following the National Dialogue event, representatives from the Voluntary Principles Initiative (VPI) convened at the U.S. Embassy to further discuss the issues raised in the morning session, as part of the VPI Ghana Working Group. This group is intended to bring together key policy-level stakeholders who can identify and trouble shoot specific problem sets related to the VPs, as well as share best practices and lessons learned. It also represents an important opportunity to establish and maintain a multi-stakeholder forum on the VPs, after our program concludes in the first Quarter of 2018. Key issues discussed at both events are outlined below:

The oil/gas sector continues to grow in Ghana, both in the Western region, both on-shore and off-shore, and through new exploration in the Volta region. Increased collaboration and dialogue between oil/gas companies, communities and Ghana Government agencies is needed to ensure there is clear communication, and tensions are not escalated between communities and operators, or between operators themselves. Among the key items discussed:
Incursions of fishing boats and canoes into exclusions zones around offshore oil/gas operations remains a pervasive issue. Fishermen are attracted to the exclusion zones, where artificial reefs and lights attract greater quantities of fish, thus bringing them into conflict with oil operations. Tensions with the oil operations are exacerbated by the perception among the fishing communities that dwindling fish stocks are the result of the oil/gas operations. The use of scientific studies is crucial for reducing these issues, in order to disprove the link between reduced fish stocks and the oil operations. Though this evidence is delivered through increased community engagement and awareness raising, it was noted that there is always room for improvement by operators with respect to engagement with communities.
Operators should focus on education of local fishing communities across the six coastal districts, as well as to a broader range of communities beyond who may be indirectly affected. Operators should also work more closely with the Fisheries Commission and Ministry of Justice and Attorney General, to ensure repeat offenders are being brought to account for incursions. Given the robust data collection from the operators on incidents relating to incursions, this information could be better used to flag repeat offenders to authorities. Strengthening enforcement, even if it is through alternate justice mechanisms outside of court, will provide stronger deterrents for fishing vessels who routinely breach the zones.
The International Tribunal of the Law of the Sea (ITLOS), will deliver its ruling on the maritime boundary case between Ghana and Cote d’Ivoire at the end of September 2017. Participants noted that there is a threat of heightened tensions, and possibility of incursions into the maritime area. This may have security implications for existing oil/gas operators, as well as for fishing vessels in the area.
It was noted that piracy remains a risk in Ghana waters, with pirates potentially disguised as fishing vessels. Monitoring and identification is further complicated by the vessels coming from outside of Ghana to fish, such as from Togo and Cote d’Ivoire.

The hot-button issue in Ghana remains illegal small-scale mining (‘Galamsey’). The Government announced a five-year plan to address the issue through the Multilateral Mining Integrated Project (MMIP). The project will focus on a broad range of aspects such as alternate livelihoods, environmental restoration, and strengthening enforcement. As part of this, Operation Vanguard was announced on July 31st, 2017 in which a joint military and police task force (JTF) will be deployed to communities in Ashanti, Eastern and Western regions. While Operation Vanguard is in its preliminary stages, all small-scale mining in these areas (including legal, licensed operators) have been ordered to stop work.

The MMIP and Operation Vanguard present an important opportunity to promote the VPs, integrating security and human rights into the broader project implementation. As the chief focus — and resources — of the Ministry of Lands and Natural Resources over the coming years will be focused on the MMIP, it is crucial that the VPs is not siloed from the project and therefore de-prioritized.
It was noted that all members of the JTF for Operation Vanguard received training on security and human rights as part of their broader training, prior to deployment to the three regions.
Civil Society Organizations (CSOs) must play a key role in monitoring the implementation of Operation Vanguard. With so many livelihoods at stake — including those who hold legitimate small-scale mining licenses that have been required to stop work — there is significant potential for tensions and violence between communities and the JTF. CSOs must ensure they are undertaking early warning and preventative response to de-escalate potential conflict, as well as monitor and report on any allegations of abuse.

Key priorities that emerged during the discussions include a need to ensure that the VPs is integrated into the MMIP to ensure ongoing relevance and focus for the lead Ghana Ministry on the VPs. This must be balanced with a more collaborative inter-ministerial approach to the VPs within the Ghana Government, to ensure there is also a focus on the oil/gas sector.

During the week of September 4th, our partners WANEP-Ghana travelled to Washington, D.C. to participate in several events related to security and human rights in Ghana. The National Network Coordinator Mr. Albert Yelyang, and Program Manager Ms. Alice Akayete first participated in a roundtable session presenting key findings, lessons learned and successes from our Ghana program over the past two years. Presenters also included Hannah Blyth from FFP and Jenny Stein from the U.S. State Department. Discussion proved fruitful with a range of policy makers and practitioners from the international community attending in-person and over the phone.

During the week, WANEP-Ghana and FFP also provided a briefing to key stakeholders at the U.S. State Department; including officials from the areas of Security and Human Rights, Africa Policy and Multilateral and Global Affairs. They had the opportunity to discuss both the DRL VPs program, as well as more broadly country risk and vulnerability factors in Ghana.

Finally, WANEP-Ghana partnered with Search For Common Ground and FFP to hold a discussion on land and resource conflict issues in West Africa, with Albert Yelyang presenting on Ghana. The event was attended by the U.S. Government, NGOs, U.S. Congressional staff and think tanks.