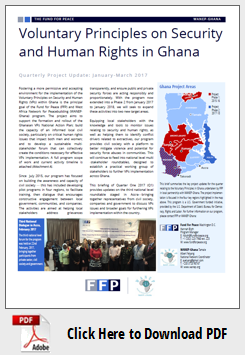 Fostering a more permissive and accepting environment for the implementation of the Voluntary Principles on Security and Human Rights (VPs) within Ghana is the principal goal of the Fund for Peace (FFP) and West Africa Network for Peacebuilding (WANEP-Ghana) program. The project aims to support the formation and rollout of the Ghanaian VPs National Action Plan; build the capacity of an informed local civil society, particularly on critical human rights issues that impact both men and women; and to develop a sustainable multi-stakeholder forum that can collectively create the conditions necessary for effective VPs implementation. A full program scope of work and current activity timeline is attached (Attachment A).

This briefing of Quarter One 2017 (Q1) provides updates on the third national level roundtable staged in Accra—bringing together representatives from civil society, companies and government to discuss VPs issues and broader goals for furthering VPs implementation within the country.

On the 22nd February 2017, FFP and WANEP-Ghana held our third national roundtable on the VPs in Accra. Building on the momentum from the two roundtables held in July and October 2016, this dialogue sought to identify longer term goals for VPs implementation that could complement the Government’s three year National Action Plan (NAP). In attendance were key stakeholders that had attended previous VPs events including government ministries, companies, civil society representatives, international partners and the media.

The aim of this roundtable series is ultimately to establish a sustainable multi-stakeholder forum which is able to identify priorities and work together to facilitate implementation. The first dialogue was intended as an introduction of the key stakeholders to the process, and linkages between local communities and national level representatives. Then, the second dialogue brought some of those identified security and human rights issues to a higher policy level, including a review of the government’s NAP. Now, the third dialogue built upon the feedback from the second dialogue which identified a need for broader goals/strategy to complement the shorter term NAP.

In attendance at this third roundtable were representatives from key Ghana Government ministries including the Ghana Army and Navy, Ministry of the Interior, Petroleum Commission, Commission on Human Rights and Administrative Justice, Minerals Commission, Ministry of Justice and Attorney General, Ministry of Energy, and the Environmental Protection Agency. Private sector representatives included the Ghana Chamber of Mines, AngloGold Ashanti, Newmont Mining, Kosmos Energy, ENI Ghana, Tullow, and G4S. Civil society was represented by WANEP-Ghana, as well as the WANEP regional office, along with FFP and the media. International partners in attendance included the U.S., Australian, Canadian, Dutch, and Swiss governments.

One of the issues highlighted in this roundtable series continues to be illegal Artisanal Small-scale Mining (ASM). The environmental degradation, land encroachment and criminality have all been identified as risks to companies and communities, and can involve escalation to public security intervention by police or the Ghana Armed Forces.

One of the innovative approaches shared by a mining company, was their formation of Community Watch Committees. These Committees are trained in the basic tenets of the VPs, and collaborate with the local police to focus on reducing criminality, and ensuring citizens’ rights are respected.

The role of the Ghana Army in their deployments to clear concession areas of illegal miners in recent months was also praised by multiple dialogue participants, noting the officers’ professional conduct towards communities and no reported incidents.

Another major theme in the dialogue discussion was the need to increase capacity of local private security providers. Often some of the biggest risks of human rights abuses occurring can be from front-line personnel who are under-trained and ill-equipped. Currently, very few local private security providers in Ghana provide security and human rights training to their guards, which not only increases risks to communities, but also reduces the ability of many international companies to hire local providers due to procurement requirements. Regulation of private security providers, particularly in tightening the requirements for obtaining private security licenses to include VPs training, as well as of vetting personnel, is a crucial part of the solution. It will also serve to build the capacity of local providers to bid for security contracts with larger companies, boosting local ownership and employment.

FFP and WANEP-Ghana have laid the ground work for local training and dialogue activities in two new areas in May 2017. These new areas will include Tarkwa in the Western region, where a majority of mining operations take place, and the Keta Basin in Volta region which is home to offshore oil exploration and a salt mine. The activities will involve training on security and human rights, media, extractives industry transparency, and conflict resolution; followed by a multi-stakeholder dialogue.

On the 18th February 2017, FFP and WANEP-Ghana travelled to Tarkwa in the Western Region to meet with community stakeholders to introduce the planned activities, and identify potential issues. We met with community representatives from the AngloGold Ashanti mine in Tarkwa, who expressed discontentment with their perceived exclusion from employment and economic opportunities from the mine. They noted their intentions to potentially take strike action if their grievances are not addressed. They also reported large contingencies of armed public security forces deployed to guard the mine site. Though it was noted that there had not been any issues between security forces and community members, they did query the level of armed security personnel needed in an area which appeared peaceful. The issue of small scale artisanal mining (known as Galamsey) was not identified as a concern for community members, which is in contrast to government and company perspectives raised in other VPs forums. These perspectives and potential grievances are valuable context which will inform the training and dialogue in May 2017.

FFP and WANEP-Ghana then traveled to the Keta Basin area in the Volta region on the 20th February 2017, where we met with community members and company representatives. There has been a history of issues related to a salt mine in the Keta Basin area, with reported riots and clashes with security personnel in December 2015, after communities from Agbozume-Tagba took issue with the company’s use of a section of the lagoon for salt mining. According to community members we met with, compensation was not required to be given to local communities, as the lagoon is a public resource, and not part of any one community’s land title. When we met with members of the company, they suggested relations had since improved with surrounding communities, and were a major source of livelihood for many women, who mine salt while their male family members fish. Oil and gas exploration was also noted as an emergent issue, as offshore exploration has begun.

Focusing on both the oil/gas and salt mining issues, a training and dialogue session will come at an important time for the Keta Basin area. This is especially crucial in light of new media reports of an incident in involving angry local youth storming the site in March 2017, resulting in a fatal clash with police which left one community member dead. This was then followed by reported community protests (see box above).

The February national roundtable received national coverage, resulting from continued inclusion of the media in the VPs process at the national and local levels. Representing not only their media outlet, journalists also play a key role in ensuring civil society voices are heard, and diverse perspectives are shared. The coverage focused on the VPs initiative, calling for the Ghana Government to take stronger ownership of VPs implementation see box on Page 3.

The program’s website www.ghanavps.org was launched at the February roundtable, with the intention of eliciting feedback and further inputs from key stakeholders. The site provides communities with a platform to monitor and report issues that can be followed up by WANEP-Ghana, as well as broader information about the VPs and how different stakeholder groups can get involved.

The following activities will take place in Q2 2017 (April – June) of the Program: