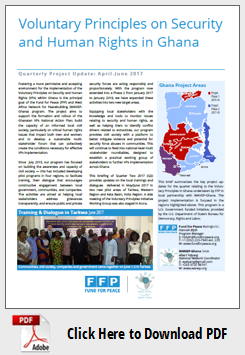 Fostering a more permissive and accepting environment for the implementation of the Voluntary Principles on Security and Human Rights (VPs) within Ghana is the principal goal of the Fund for Peace (FFP) and West Africa Network for Peacebuilding (WANEP-Ghana) program. The project aims to support the formation and rollout of the Ghanaian VPs National Action Plan; build the capacity of an informed local civil society, particularly on critical human rights issues that impact both men and women; and to develop a sustainable multi-stakeholder forum that can collectively create the conditions necessary for effective VPs implementation.

Since July 2015, our program has focused on building the awareness and capacity of civil society — this has included developing pilot programs in four regions, to facilitate training, then dialogue that encourages constructive engagement between local government, communities, and companies. The activities are aimed at helping local stakeholders address grievances transparently, and ensure public and private security forces are acting responsibly and proportionately. With the program now extended into a Phase 2 from January 2017 to January 2018, we have expanded these activities into two new target areas.

This briefing of Quarter Two 2017 (Q2) provides updates on the local trainings and dialogues delivered in May/June 2017 in two new pilot areas of Tarkwa, Western Region and Keta Basin, Volta Region. A side meeting of the Voluntary Principles Initiative Working Group was also staged in Accra.

VPs Community Training and Dialogues in Keta and Tarkwa

This dialogue took place amidst the backdrop of two incidents that were reported around the Kensington salt mine site in February 2017. The first involved an angry mob storming the site, a staff member was injured, and the police were called. During a confrontation between the mob and the police, a community youth was shot and killed. The second incident that followed several weeks later was a major protest agents the site. The training and dialogue held by FFP and WANEP-Ghana in Denu, Volta Region on 29–30 June 2017, sought to provide community members, local government, and the salt mining company a constructive platform to identify and begin to resolve the underlying grievances that led to the violence. It also provided an opportunity for police, community and company representatives alike to understand more about the need for company risk assessments to determine appropriate site security arrangements, and training of security forces to mitigate the risk of community protests escalating into increased security response and potential human rights abuses.

One of the key issues expressed during the dialogue was community livelihoods. As the salt mine borders several communities, there were grievances expressed that some communities had more access to salt mine concession areas than others. This was also complicated by an ongoing chieftaincy dispute in the area. The company and community agreed to continue to engage in dialogue to resolve this issue peacefully.

A major communication breakdown over the environment was also identified between the community members and the company. Community members, including some traditional leadership, were of the opinion that recent changes in environmental patterns – notably drought – had been caused by the company. Specifically, they believed that the company had equipment and/or ritualists which prevented rainfall, and that it had caused the coconut trees to die and wells where they draw their water supply to dry up. The company disputed these claims, explaining that this was part of broader climate change impacts. It was identified that an impartial environmental expert, such as from the Environmental Protection Agency, could be engaged to investigate the matter, and clear up any misconceptions. The company also proposed access of the community to their weather station they have onsite, which may help provide more detailed information on weather and rainfall patterns. It was also noted that a government review of water sources for the mine (salt water versus bore water), and the impacts that may have on the community’s access to drinking water, should be clarified.

In light of the February 2017 incidents, it was identified that the company needed to undertake more regular and thorough risk assessments, to determine the appropriate security arrangements for their site. In the case of the incident where a community member was killed, some dialogue participants detailed that the police who were called to the site, were overrun by the crowd and felt compelled to defend themselves, thus discharging their weapons. Risk assessments by the company to determine the right levels of private and/or public security, will better ensure in future that guards or public security personnel are deployed appropriately. Engagement and joint planning with the Police to discuss security arrangements, and training on Use of Force, are also crucial to mitigating the future issues.

Investigation of a Rights Incident

Several community members expressed dismay at the February 2017 incident which culminated in the death of a youth during a site clash with police. There was competing accounts of the incident, with some community members suggesting the police used live ammunition, while others suggesting only rubber bullets were used in self-defense. While an investigation is understood to be underway by the District Security Committee (DISEC), as well as broader issues surrounding the community being reviewed by the National Peace Council, communication has not been flowing down to community members. It was identified that the company should endeavor to monitor the investigations, and provide updates to community members.

This dialogue and training in Tarkwa, Western Region took place from 1-2 June, 2017. It brought together mining companies AngloGold Ashanti and Golden Star Resources, and local government, police, and community representatives – to learn and discuss tools for the promotion of sustainable security in the area. Mining in the Western region has been a centuries-old practice, and participating stakeholders were keenly aware of the impacts and opportunities the sector can bring – but also the legacy grievances that can be left behind.

Companies’ resettlement programs for communities that reside on mining concession areas, can often result in perceived winners and losers. Communities that reside just outside the mining concessions, or may be practicing small scale informal mining or farming on concession areas not previously being used, can feel as if they are being denied compensation that other communities are receiving. It was identified during the dialogue that these grievances have the potential to escalate into inter- or intra-communal conflict, and increase risks of violence against the company.

Community representatives identified high youth unemployment as a key threat to stability in the area. There was discussion of protests and agitations by youth from local communities, who perceive the mine as excluding them from meaningful employment. Companies noted different initiatives they have implemented to boost local hires at their site – including balancing the many different communities based around the one concession, to ensure fair representation. However, a gap in information sharing back to local communities – especially youth – needs to be addressed to mitigate possible escalation. A feedback loop to provide unsuccessful employment applicants with constructive feedback will help community members to feel less excluded.

The hot-button political issue throughout Ghana is ‘Galamsey’, small-scale illegal mining practices which are having devastating impacts on the environment, and can be associated with increased criminality, such as proliferation of weapons. ‘Galamsey’ is a major security issue for many mining companies in the region, as miners encroach on the mining concession areas. This has resulted in many companies having police and/or military deployed in and around their sites. As part of a broader government campaign to clamp down on ‘Galamsey’, new military platoons have also been deployed all over the country to clear out illegal mining sites. For participants in Tarkwa, several noted the opposition many local community members felt towards the military presence. This has the potential to escalate into violence, especially if public security forces are not adequately trained in Use of Force and security and human rights principles.

Discussion included the highly publicized event of that week in Ghana, whereby a Military Commander who was deployed as part of the ‘Galamsey’ campaign to a community in the Eastern region, was lynched by an angry mob of community members. The need for strong multi-stakeholder engagement, peace messaging in communities, and training for security personnel are critical to avoid escalation to violence in other areas such as Tarkwa.

Following the completion of the local training and dialogue activities for this program, the pre-activity and post-activity data was analyzed for six areas across the five regions of the country. As outlined below, feedback from participants show a significant uptake in knowledge of the VPs following our activities. Across the five regions, the stakeholder groups with the highest increase in awareness about the VPs was the Media, increasing 71% from baseline, and Communities/Civil Society who increased 58% from baseline. This was followed by Extractives Companies with a 47% increase, and Local Government with a 43% awareness increase from baseline. For the Media and Companies, participants reported 100% awareness of VPs concepts after the training and dialogues.

The following activities will take place in Q3 2017 (July– September) of the Program:
Fourth National Dialogue in Accra on August 1st, 2017.
Side meeting at the U.S. Embassy in Accra in August 2017, bringing together key VPI stakeholders to progress the VPI Working Group, overseen by the international initiative.
Roundtable in Washington D.C. with FFP and WANEP-Ghana presenting on lessons learned and best practices from the Ghana project.