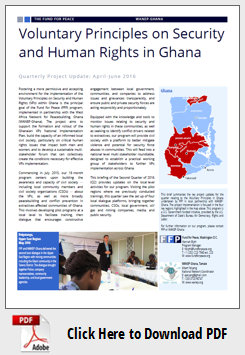 This briefing of the Second Quarter of 2016 (Q2) provides updates on the local-level activities for our program. Visiting the pilot regions where we previously conducted trainings, this quarter saw the set up of four local dialogue platforms, bringing together communities, CSOs, local government, oil/gas and mining companies, media, and public security.

Fostering a more permissive and accepting environment for the implementation of the Voluntary Principles on Security and Human Rights (VPs) within Ghana is the principal goal of the Fund for Peace (FFP) program, implemented in partnership with the West Africa Network for Peacebuilding, Ghana (WANEP-Ghana). The project aims to support the formation and rollout of the Ghanaian VPs National Implementation Plan, build the capacity of an informed local civil society, particularly on critical human rights issues that impact both men and women, and to develop a sustainable multi-stakeholder forum that can collectively create the conditions necessary for effective VPs implementation.

Commencing in July 2015, our 18-month program centers upon building the awareness and capacity of civil society — including local community members and civil society organizations (CSOs) — about the VPs, as well as more broadly peacebuilding and conflict prevention in extractives-affected communities of Ghana. This involves developing pilot programs at a local level to facilitate training, then dialogue that encourages constructive engagement between local government, communities, and companies to address issues and grievances transparently, and ensure public and private security forces are acting responsibly and proportionately.

Equipped with the knowledge and tools to monitor issues relating to security and human rights in these communities, as well as seeking to identify conflict drivers related to extractives, our program will provide civil society with a platform to better mitigate violence and potential for security force abuses in communities. This will feed into a national level multi-stakeholder roundtable, designed to establish a practical working group of stakeholders to further VPs implementation across Ghana.

This briefing of the Second Quarter of 2016 (Q2) provides updates on the local-level activities for our program. Visiting the pilot regions where we previously conducted trainings, this quarter saw the set up of four local dialogue platforms, bringing together communities, CSOs, local government, oil/gas and mining companies, media, and public security.

The Upper East dialogue held on May 10th, 2016 in Bolgatanga focused on communities from the Talensi District where small and medium scale mining is prevalent. Of the 16 dialogue participants, key stakeholders included the Chinese-owned mine operator Shaanxi Mining, along with local government such as the Minerals Commission, and community leaders including the local Chief’s representative, assembly persons and the district Coordinating Director.

The dialogue sought to follow up issues during the first local dialogue in Bolgatanga, which was held by WANEP-Ghana in February 2016. Focusing on the underlying issues raised by community members which have the potential to escalate into violence, participants discussed a chemical spill by a local mining company. The Minerals Commission representative was able to provide an explanation to concerned stakeholders about the action that has been taken by the government to investigate the spill, and protect the health and safety of the nearby communities.

Also raised were ongoing trust and communication concerns between communities and a mining company over unmet expectations in their signed Memorandum of Understanding (MoU). Following the first dialogue, community leaders intervened to de-escalate the potential for violent protest after local youth sought to rally in response to the MoU. The second dialogue supported further constructive engagement between community leadership and the company to find a peaceful path forward for resolving the grievances.

The first local dialogue for the Brong-Ahafo Region was held in the Asutifi District with Kenyasi, Kenyasi #2, Ntotoroso, and Wamahinso communities. The 19 participants included representatives from Newmont Mining, local NGOs, youth association members, community leadership, government and the media. Like the Upper East dialogue, the focus remained on identifying underlying issues which have the potential to escalate into conflict and violence.

One of the ongoing challenges was the high levels of youth unemployment in the region, and the expectations from communities around jobs in the mine site. Also highlighted was the perceived communication gaps between some local stakeholders and the company. This issue also came out in other regions, where it was highlighted that some of the Traditional leadership may be engaging on behalf of their communities with company representatives, however community members themselves do not always feel they have the same level of access to information.

As part of an ongoing commitment to follow up on local issues as they arise on security and human rights, the group elected leads from Newmont, CHRAJ, the Traditional authority, a women’s committee, religious group, and youth association to facilitate future engagements.

The Ashanti region dialogue, held on May 13th 2016, featured 17 participants from AngloGold Ashanti Mining, CHRAJ, private security, police, and traditional community leaders and associations. One of the pervasive issues for the Obuasi communities and mining operations in the Adansi West District has been illegal mining activities, or “Galamsey” as it’s known in Ghana. The Galamsey operators, who continue to attempt to trespass on the mining concession, sometimes armed, pose security risks not only to the company but also to themselves. During the dialogue, participants collectively voiced concerns about the issue, and have identified the licensing arrangements with the government as a key driver of the ongoing challenges.

The Western region dialogue took place on May 16th 2016 in Takoradi, and the 21 participant’s represented communities from the six coastal Districts affected by activities of oil/gas operations, along with companies and local government.

The dialogue provided a unique opportunity for oil/gas companies to share lessons learned (see box below) — including ways in which they have been able to engage fishing communities to communicate the exclusion zones surrounding the oil rigs. Using color coded charts which correspond with vessels in the water, the fishermen are able to better identify the exclusion areas where fishing is prohibited. This has reduced run-ins by local fishing boats with public security vessels patrolling the areas.

Also raised during the dialogue were potential drivers of conflict such as compensation for community members for new on-shore pipeline construction, lack of communication from companies about their plans to community members, and an inter-communal dispute over a Chief who had allegedly misused community compensated funds.

To follow up on future issues, the facilitators nominated included the Sekondi-Takoradi Chamber of Commerce, Eni and Tullow, Ghana National Petroleum Commission, Police and Navy representatives, and local community leadership.

In tandem with the local dialogues, local radio programs were recorded in the three remaining areas of Brong-Ahafo, Ashanti and Western Regions. The Upper East Region recoded their radio program in Q1 2016 during their first dialogue. The hour-long panel discussions involved local leadership and experts discussing the core tenants of the VPs and its applicability to local issues. Each program was recoded for future replays and it is intended that either the voice files or transcripts will be made available on the VPs website our program is developing. The following stations broadcast the regional programs:

Radio remains a pervasive medium of communication in Ghana, especially to local communities which do not have access to internet or television. Through empowering local stakeholders to lead a radio discussion on the VPs, it provides community members not involved in the training and dialogues to still participate in the process and follow up on key security and human rights issues with their local leadership.

As part of the broader program efforts to promote understanding on the VPs and security and human rights concerns, local journalists have also played a role in highlighting key issues discussed in the dialogues (see box above).

The website resource www.ghanavps.com is nearing completion, with the final launch planned for later this year.

Non-Extractives Voices in the VPs

The origins of the VPs guidelines and membership of the international initiative for companies has traditionally been focused on the extractives sector. Increasingly though, the VPs is being implemented by non-extractives companies worldwide, ranging from solar energy to agribusiness. Ghana is no exception, and so our VPs program has begun to engage non-extractives companies to be a part of the security and human rights conversation in the country.

In the recent Western Region dialogue, the energy company Amandi Energy was represented. Like many large scale projects, issues of security deployment, thorough risk assessments and community engagement are all key considerations for building something like an energy plant. During the dialogue, Amandi were able to share their own lessons learned around established grievance reporting and response mechanisms for communities who were relocated as a result of operations. Addressing land and livelihood compensation issues through a transparent and sensitized process is often a key element to mitigating community-company conflict for extractives and other large scale projects alike.

Taking place next quarter are the following project activities: