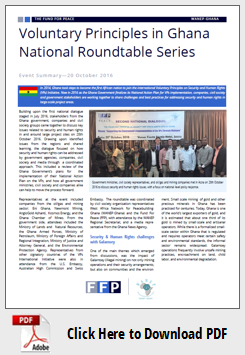 Building upon the first national dialogue  staged in July 2016, stakeholders from the Ghana government, companies and civil society groups came together to discuss key issues related to security and human rights in and around large project sites on 20th October 2016. Drawing upon identified issues from the regions and shared learning, the dialogue focused on how security and human rights can be addressed by government agencies, companies, civil society and media through  a coordinated approach. This included a review of the Ghana Government’s plans for  the implementation of their National Action Plan on the VPs, and how all government ministries, civil society and companies alike can help to move the process forward.

Representatives at the event included companies from the oil/gas and mining sector; Eni Ghana, Newmont Mining, AngloGold Ashanti,  Kosmos Energy, and the Ghana Chamber of Mines. From the government side, attendees included the Ministry of Lands and  Natural Resources, the Ghana Armed Forces, Ministry of Petroleum, Ministry of Foreign Affairs and Regional Integration, Ministry of Justice and Attorney General, and the Environmental Protection Agency. Representatives from other signatory countries of the VPs  International Initiative were also in attendance from the U.S. Embassy, Australian High Commission and Swiss Embassy.  The roundtable was coordinated by civil society organization representatives West Africa Network for Peacebuilding-Ghana (WANEP-Ghana) and the Fund For Peace (FFP), with attendance by the WANEP Regional Secretariat, and a media representative from the Ghana News Agency.

One of the main themes which emerged from discussions, was the impact of Galamsey (illegal mining) on not only mining operations and their security arrangements, but also on communities and the environment. Small scale mining  of gold and other precious minerals in Ghana has been practiced for centuries. Today, Ghana is one of the world’s largest exporters of gold, and it is estimated that about one third of its gold is mined by small-scale and artisanal operators. While there is a formalized small-scale sector within Ghana that is regulated and requires operators meet certain safety and environmental standards, the informal sector remains widespread. Galamsey   operations frequently involve unsafe mining practices, encroachment on land, child labor, and environmental degradation.

The Galamsey issue intersects with security and human rights concerns in and around project sites, where illegal miners often occupy leased mining concessions in order to find gold.  Some groups of Galamsey can be armed with machetes or weapons, triggering increased security measures by companies. In concessions in regions such as Brong-Ahafo, Ashanti and  Western, the Ghana Army is sometimes deployed to deter activities, or clear makeshift settlements.

The deployment of public security forces can escalate tensions between local community stakeholders and the company,  and in extreme cases, lead to violent confrontations. During the roundtable discussion, the importance of training of security personnel on use of force  was raised  – along with appropriate equipment for the deployment task. Some concerns were noted by participants about military personnel being equipped with AK47 weapons,  without access to protective non-lethal alternatives, such as riot gear. Funding constraints have been a factor in preventing more protective gear being utilized by public security personnel.

It was also acknowledged during proceedings that in order to prevent the need for security responses in the first place — such as public security force deployments — the root causes of Galamsey must be addressed. One of the main reasons identified for the widespread Galamsey, is lack of alternate employment opportunities for youth.  Mining gold can pay much more than other local jobs such as hawking goods, even at the expense of personal health and safety. Some roundtable participants noted that limited access to education and training of local community members also means they are not able to obtain the skilled positions at large scale mines. Stronger collaboration between companies, government and communities on sustainable development programs, such as training and education for youth is an important piece of resolving the issue. Creating dis-incentives through closer monitoring and enforcement of laws and regulations around small scale mining is also key to reducing illegal and unsafe practices, and the reliance on military deployments around concessions to dispel Galamsey operators.

Fishing in exclusion sites around oil and gas operations

Another topic discussed during the roundtable was fishing in exclusion zones in the Western region, and the security implications. Companies with off-shore oil/gas  operations have exclusion zones where local fishing vessels are required to avoid for safety reasons, demarcated through buoys, and communication with head fisherman. To patrol these zones, the companies have agreements with the Maritime Authority, who then engages public security forces where required. Due to resource constraints,  the  availability of Maritime Police or Navy personnel to arrest Fishermen, in the exclusion zone, and investigate cases,  remains limited.

Without stronger enforcement, people continue to enter the exclusion zones—where there is often large fish supplies due to the artificial reefs created around the offshore operations.  Though no specific recommendations were made on this issue,  ongoing dialogue between law enforcement, company and community to reduce exclusion zone violations is crucial to identifying constructive  solutions.

Ø Must address the underlying problems that are incentivizing  people to engage in illegal mining, such as:

Ø Incentivizing  formal small scale mining, through government and other stakeholders providing a path to education and training

Ø Engaging with Chiefs and thought leaders within communities to solicit buy-in to prevent Galamsey, and ensure environmental reclamation processes